Officially a free man. Six weeks of watching the glorious weather from the confines of the air conditioned library are over, as is my exam beard/stubble.

First exam result came through as a 2:1, which I am happy about seen as I only completed 75% of the paper. My Excel grade calculator which I produced during procrastination in my exam period signals that I should get a strong 2:1, pushing towards a 1:1 in Business Studies.

I spent the evening with Paolo Nutini late last month in Manchester, with my housemate, Ed and I thoroughly enjoying it! The handful of groupies stood by the stage door looked more appealing than the queue out of the car park, so we joined them and met the man himself, who is set to take the festival scene by storm this summer.

I returned to Leicester on the Monday, prior to my Finance exam on the Thursday to watch 4/5th’s of One Direction take on a team including Robert Pires, Robbie Savage and Michael Vaughn, captained by Piers Morgan. Styles grabbed a 90th minute equaliser from the penalty spot (surprisingly!) taking the game to penalties, with Morgans team being victorious.

Feel my Finance exam went well on the Thursday, picking questions on Weighted Average Cost of Capital and Leasing vs Buying assets.

On the Friday I enjoyed a dry day at Alton Towers which had remarkably small queues considering it was half term!

10 days ago I visited the home of Batman, Wayne Manor (Wollaton Park) to attend No Tomorrow Festival. The festival attracted the likes of Duke Dumont, Indiana, Jess Glynne (Vocals for Clean Bandits – Rather Be), Sam Smith, London Grammar and Clean Bandit. The weather started in a traditional festival style (puddle jumping, glorious weather for ducks), but the sun was shining by the mid-afternoon! 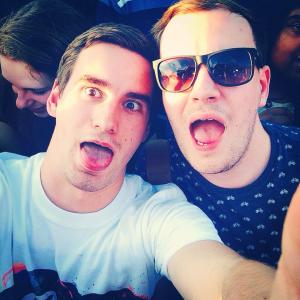 I spent Saturday at Leicester Races which was great fun and managed to come away with £17.35 in winnings, beginners luck! However I managed to miss this guy:

I’ve picked up some bar work recently to fund my kitty for interview expenses. I’ve been meeting with some exciting companies in both the Midlands and in London, of which I am waiting to hear back from!